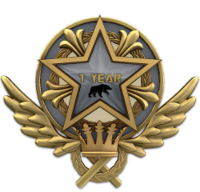 Firstly, again congratulations to Janet on her February win for Theta Fleet’s Player of the Month for the 51st (Area 51) Task Force. Everyone has done such a great job over the past 12 months, and I am always happy when one of our writers gets recognition. Furthermore, yes, I said 12 months. Some of you have been here that long or are soon to be hitting that magic mark. I have added a commemorative 1-year service medal to the Distinctions tab of the primary character to everyone who has hit or is soon to hit that mark.

March 2021 marked the first year that the USS Standing Bear as a sim has been in operation. That alone is a big milestone for various reasons though perhaps no more obvious than the simple reason most sims crash and burn within the first few months. Standing Bear has been an exception because of everyone who has been a part of its past and present whether you have been here the entire time or joined down the road. We became more than an exception though. What you have all helped accomplish was nothing short of a Herculean feat of epic proportions.

We launched in Pegasus Fleet in March of 2020 as a bit of a gamble, break from my norm to entrust said fleet with something with my conceptual markings. We did fantastic for several consecutive months, you did circles around the rest of Pegasus in the quantity of posts and per user participation, enough so that I was eventually given a Task Force. I appreciate that though I know it was your creativity and push that added to my seasoned years of running things that got me there. Though we left Pegasus for a less politically charged atmosphere in Theta Fleet, we certainly branded that winged horse’s ass.

It should never be about the quantity of posts or how many posts a certain induvial contributes to a statistical number. Standing Bear is about creative collaboration, and we aim to leave our mark not in quantity, but in quality. So, I can happily say that for over a year now, you all have done some quality writing. Thank you for that.

Conceptually, I made some choices uncommon for a sim. Most go for a larger starship with several decks. I opted for something much smaller with less than a dozen decks. It was a bit of a risk, but the bunch of writers that came together to give the Standing Bear life (all of you) has been the crucial factor in the initial and the continued success.

One huge thing about the Standing Bear is that I am pouring my heart into it. It was and still is intended to be my swan song. I started doing simming stuff just shy of my thirteenth birthday and have been sitting in the Captain’s seat off and on since I was about twenty. I never really took much in the way of a step away aside from flirting with a few month’s break when I moved to Japan, but that simming bug bit me and I came back quickly. Still, I have been doing this dance for almost twenty years, and though I will probably always nibble at simming as a writer, tossing myself into a crew position every now and again, the prime years of me doing this are coming to a close.

The USS Standing Bear still has plenty of roar in her. So, no I am not leaving anytime soon. I am just saying thank you for taking a chance and letting me have one last successful command of a great sim full of wonderful people. I could not fathom a better last command than the Standing Bear, and my intentions are to ride this wave out for a few more years. So, strap in because we have an exciting remainder of our journey together and remember the golden rule: Take Chances, Make Mistakes, and Get Messy!